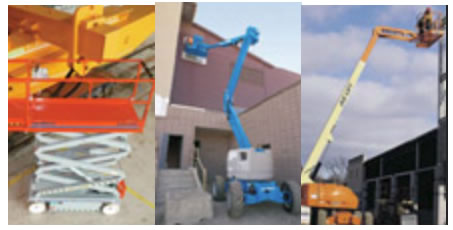 Do you have a big job coming up and need to procure an aerial lift? Don’t know which kind is right for you? In our latest article, we will break it down for you! We are comparing scissor lifts vs. boom lifts. Let’s get started!

What Are Scissor Lifts?

Scissor lifts are used to elevate workers to high areas, and they are most commonly used in manufacturing and industrial settings. These particular lifts are supported by crisscrossing braces that extend upward.

Most scissor lifts are designed to move only up and down. However; some are able to move a few feet horizontally. One of the greatest advantages to scissor lifts is that they feature large platforms that can fit several people at once (along with materials).

What Are Boom Lifts?

A boom lift is a type of aerial lift, but it provides much greater flexibility than a scissor lift. This is because it is supported by a hydraulic arm that is capable of maneuvering around obstacles. Boom lifts can also extend to higher elevations.

There are two basic types of boom lifts. Articulating boom lifts have arms that bend, making it easier to move the bucket around things.Telescopic boom lifts, have straight arms. Telescopic lifts usually have higher weight capacities, but they are more difficult to maneuver.