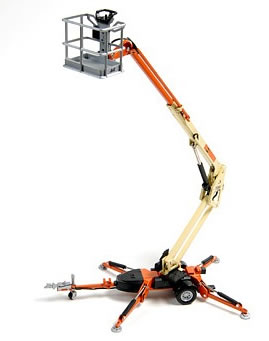 The towable lift is often referred to as a cherry picker, man lift, basket crane, hydra-ladder, towable aerial lift, and towable boom lift. It is a common type of aerial work platform that features either a flat platform or an open bucket at the end of a hydraulic arm. What makes the towable lift different from other types of aerial lifts? The fact that it is simply towed behind a truck. Our towable lifts can be towed behind vehicles with class 2 or class 3 trailer hitches! These are perfect for those that do not have a flatbed trailer to haul it around.

Towable boom lifts feature an open bucket in most cases that can be easily worked from. This removes the need for the worker to get out of the machine, which is much safer. There is less risk of falling out of the bucket and because the lift is insulated from electricity due to the rubber tires there is little to no risk of the operator getting an electric shock when working on power lines. The operator in these lifts typically have their own set of controls. So, getting into just the right location to work comfortably is efficient and easy.

Even though the towable aerial lift was originally used for picking fruits in orchards (thus the name cherry picker) it is now used for a wide variety of applications. Most commonly, they can be found on the side of the street where they are used to work on telephone, cable and power lines. When communities put up holiday decorations they will often use a towable lift as well. Some fire stations even use towable boom lifts instead of a simple ladder! They can even be used to clean windows!

If you are interested in purchasing or renting a towable lift, you have come to the right place! We have many new towable lifts as well as some used towable lifts. Our lifts come from only the best brands including Genie and JLG! They can also be shipped just about anywhere in the U.S.!